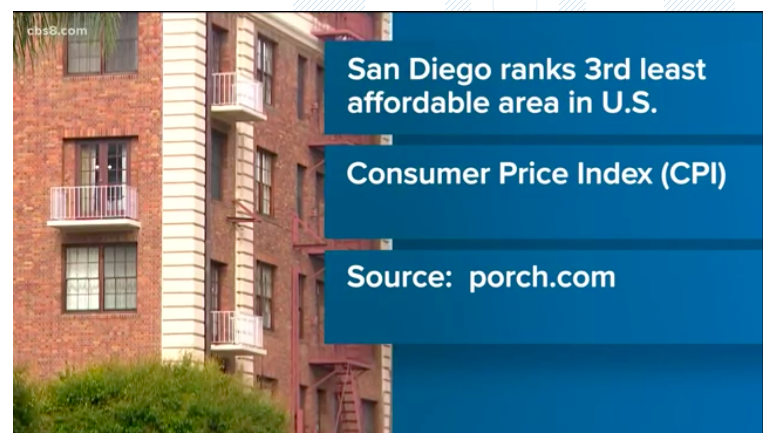 San Diegans are feeling the crunch as it becomes harder to maintain their standard of living.

SAN DIEGO — A new cost of living analysis by porch.com, the home improvement and home-buying website, found San Diego to be the third least affordable region in the country among large metro areas where overall cost of living is concerned.

“San Diego’s become so unaffordable and the whole county at this point. It’s just getting unbearable for some people,” said Oceanside resident Brian Mahon.

“It’s the price of paradise I guess, so you gotta pick or choose what to spend your money on,” said Oceanside resident Jake Lewis.

As prices surge, San Diegans are feeling the crunch as it becomes harder to maintain their standard of living.

“People are really stressed as far as their quality of life is concerned,” said Dr. Alan Gin, Economics Professor at the University of San Diego. “They’re having to spend more and more money on housing, more and more money on other products as well. Gasoline, electricity, food, things like that, and as a result, they have less money to spend on other things.”

“It’s not surprising,” said Dr. Gin. “Housing prices here have surged along with other things, the price of gas, the price of electricity, and so that’s making it really expensive for people who live here in San Diego.”

The study found that the San Diego region ranked toward the bottom of the list for places where your dollar goes the furthest, only behind San Francisco and New York.

“To top it off, our income tends to lag whereas San Francisco and New York are big finance centers and have a lot of high-paying jobs,” said Dr. Gin. “We’re a little bit behind then as far as that’s concerned.” According to Realtor.com, San Diego county has the 2nd highest overall median rent in the country at over $3,008/month with California cities San Jose, Sunnyvale, Santa Clara at #1–$3,024/month and Los Angeles, Long Beach, Anaheim, at #3–$2,993.

“The high cost of buying a house has pushed people then into the rental markets and so we’ve seen this big increase then in terms of rent,” said Dr. Gin. “Some people are hurting a lot as a result of this.”